Short Definition of Science of Mind

"Science of Mind" is a generic term used by various early New Thought writers to describe a form of New Thought which combines the latest scientific breakthroughs with the finest in Ancient Wisdom traditions, including philosophy, while propounding the belief in a responsive Universal Energy.

Originating with 19th Century Philosopher John Bascom, whose book Science of Mind was published in 1881, the Science of Mind teaching is continually growing and transforming in the light of contemporary science. Science of Mind is still evolving today.

Although some misguided individuals would attempt to assert a trademark on this form of New Thought, it is a doomed expression of greed which could never be upheld in any court of competent jurisdiction where the truth of this wonderful form of New Thought would emerge. These are the same individuals whose odd delusions are in fact at the root of why New Thought did not thrive in the 20th Century.

John Bascom has been called the "often unrecognized father of New Thought." During a time in which Pantheism had entered mass consciousness and was largely the accepted view, Bascom articulated the principles that eventually came to epitomize today's New Thought movement. His work supports the understanding of the relationship of God to the soul and personality, articulating a theology of a living personal God, human rights and the continuation of the soul after death, reconciling Science and Faith through his philosophy, variously called Natural Theology, Science of Mind, and Constructive Realism.

Some believe that Bascom is timeless because of his belief in the "Unity of Mind and Matter," others because of his teaching that "the physical universe is a product of God's thought." Still others are enthusiastic about Bascom and Science of Mind because of his demonstration of health, living to the age of 84 despite physical challenges that brought others of his generation to an early demise. Bascom taught that "Physical forces throughout all time are permeated and carried forward by spiritual forces." Bascom's idea that there is "a system of laws which sustain one another and completely cover all the phenomena of the world," was later echoed by Ernest Holmes in the opening of his pamphlet: Lessons in Spiritual Mind Healing

Perhaps what makes Bascom timeless is his teaching that: "Man is both created and creator. A creature of God, he is free to work with God from this time forth." This New Thought concept which Bascom fervently promoted, was later given the name "co-creation."

It has been and still is the nature of New Thought to constantly recyle and refine ideas and in some cases failing to give credit where credit is due. Even Mary Baker Eddy who created a personal religion (Christian Science) and relentlessly pushed it forward with her intense and domineering personality, makes reference to the Science of Mind form of New Thought in her 1891 work: "Rudimental Divine Science." (http://divinescience.net/texts/divine-science-by-eddy.html)

In Rudimental Divine Science she writes:

Page 4: "Science is Mind manifested.  It is not material; neither is it of human origin."

Page 11: "the demonstration of the Science of Mind healing by no means rests on the strength of human belief.  This demonstration is based on a true understanding of God and divine Science, which takes away every human belief, and,  through the illumination of spiritual understanding, reveals the all-power and ever-presence of good,"

Page 16: "In reality there is, and can be, but one school of the Science of Mind healing.  Any departure from Science is an irreparable loss of Science.  Whatever is said and written correctly on this Science originates from the Principle and practice laid down in Science and Health, a work which I published in 1875."

In Scientific Christian Mental Practice, Emma Curtis Hopkins writes about Science of Mind in a number of places:

Page 16: "Therefore in the Science of Mind you may take for your first idea one word. It is the word 'Good'."

Page 25: "The first lesson of the Science of Mind tells the foundation idea of Mind."

Page 31: "The Science of Mind always runs by orderly steps in the same way. The first chapter of Genesis is the Science of Mind stated in the exact order of coming forth as power, as intelligence, as substance."

Page 161: "in the Science of Mind. Even your dreams tell you the state of your mind."

New Thought editor and writer William Atkinson was a strong proponent of Science of Mind, writing about this form of New Thought in 1908. The current darling of Science of Mind adherents is 20th Century author Ernest Holmes who wrote his version of Science of Mind in 1927; its references to psychic phenomena (stripped away from later versions) reveal the strong influence of Thomson Jay Hudson, who wrote The Law of Psychic Phenomena in 1893. Ernest Holmes, perhaps the quintessential American Mystic, garnered one of Hudson's three laws of psychic phenomena ["Man has two minds: the objective mind (conscious) and the subjective mind (subconscious)"] into his writings. Holmes, with the aid of co-writer Maude Allison Latham, revised his version of Science of Mind in 1938. Although in the public domain and freely available, it is not as popular as his original 1927 version of Science of Mind, perhaps because the section on psychic phenomena was excluded, or because recent editions appear to have deleted credit to his female co-writer: Maude Allison Latham. It should be noted that the 1938 revision is beloved by Science of Mind ministers around the world. The fact that it is in the public domain should not be a rationale to eliminate the co-writer from the credits. Ernest Holmes never graduated from high school, or attended any college or university. Ernest was ordained in the Divine Science tradition of New Thought (www.DivineScience.com, www.DivineScience.net, www.DivineScience.info), then went on to be awarded multiple honorary degrees from a variety of universities. Down to 13 centers, Divine Science is the oldest New Thought denomination and at one time the largest. In 2014, Divine Science was reported to be involved in some kind of merger with another old New Thought Organization. How it that this New Thought organization could go from being the largest denomination to 13 centers? According to New Thought Teachings, the reason for this would be consciousness, in this case the collective consciousness of the organization. A repetitive cycle within the New Thought movement revolves around the desire for a small group of individuals to push their interpretation of New Thought at the expense of others. This phenomena is usually first outpictured in marketing gambits such as branding.

Ernest Holmes, a 20th Century New Thought writer liked to describe this form of New Thought as: "A correlation of laws of science, opinions of philosophy, and revelations of religion applied to the needs and aspirations of humankind"

Bascom's assertion that: "The difference between saint and sinner is merely in the use and abuse of powers alike to all," was also reiterated by Ernest Holmes. Although many have remarked upon the fact that Ernest Holmes never cited any of the texts he quotes extensively in his works, it should be noted again that Ernest never graduated from high school or attended university. We must celebrate Holmes for his wonderful ability to consolidate different forms of thought. Holmes himself spoke about how he was not original in his work or his concepts. Lacking even a modicum of formal education was probably the reason that Holmes was unable to create proper citations and therefore never did. Does this fact detract from his genius? Not at all. In fact it simply makes his accomplishments all the more remarkable.

As we celebrate the contributions of so many to the Science of Mind form of New Thought, we should take pleasure in the fact that Bascom's concepts have been so deeply accepted in New Thought today that they span the vast multitude of denominations that the New Thought movement has spawned.

There are many wonderful New Thought organizations with diverse root texts and a variety of approaches to those texts and distinct methods of teaching.

Explore different New Thought beliefs and choose the approach that best suits you. While we are aware that the majority of people who choose the New Thought Path do not find a New Thought Community that suits their sensibilities, we encourage you to visit the different centers.

The basic premise of New Thought is that which is Divine is Good and Omnipresent. New Thought is based on Universal Spiritual Principles as demonstrated and taught by historical figures such as Buddha, Danika, Lao Tzu, and Jesus the Christ. It is understood there are many "Wayshowers." The strength of the teaching of a particular Wayshower is demonstrated through the consciousness and actions of the followers of that path. The adherents of each spiritual path are collectively responsible to the rest of humanity and all life to insure that the expression of their path is not abusive or violent nor violates the rights of other beings.

As mentioned above, New Thought is inclusive and draws on the wisdom of all traditions that teach the truth of our Unity with God/Good and the omnipresence of God/Good.

Explore the Rainbow of New Thought Beliefs / Discover your Truth!

New Thought supports us on our individual journey of personal spiritual evolution.

This is an independent open source New Thought Resource

Use of New Thought Resources are subject to the Terms

We are not affiliated with old New Thought Transdenominations: Neither United or International Centers for Spiritual Living, nor Unity, DivineUnity, UFBL or Divine Science. We serve all New Thought Communities regardless of their affiliation or independence.

We serve all Science of Mind & Religious Science Centers including those calling themselves Centers For Spiritual Living regardless of their independence or affiliation.

Serving New Thought provides support to all New Thought Communities regardless of their independence or affiliation.

Use of these Resources are subject to the Terms

When coming to a New Thought Center, we trust you find:

Discover a rainbow of exciting New Thought Communities around the corner and around the globe.

A Powerful Collection of Spiritual Resources

We give you a powerful platform upon which to do God's Work learning and sharing New Thought:
DivineJournal.com, NewThoughtCommunity.com, NewThoughtTao.com and many more ...

Use DivineJournal.com to Research, read & write New Thought Texts which you can share through NewThoughtBook.info.

New Thought Day was declared by James Edgerton on August 23rd, 1915
During research while expanding the free New Thought Library, one of the ministers came across an interesting quote from early New Thought Alliance President James A. Edgerton: "'The truth, once announced, has the power not only to renew but to extend itself. New Thought is universal in its ideals and therefore should be universal in its appeal. Under the guidance of the spirit, it should grow in good works until it embraces many lands and eventually the whole world.' ~ , 1915." 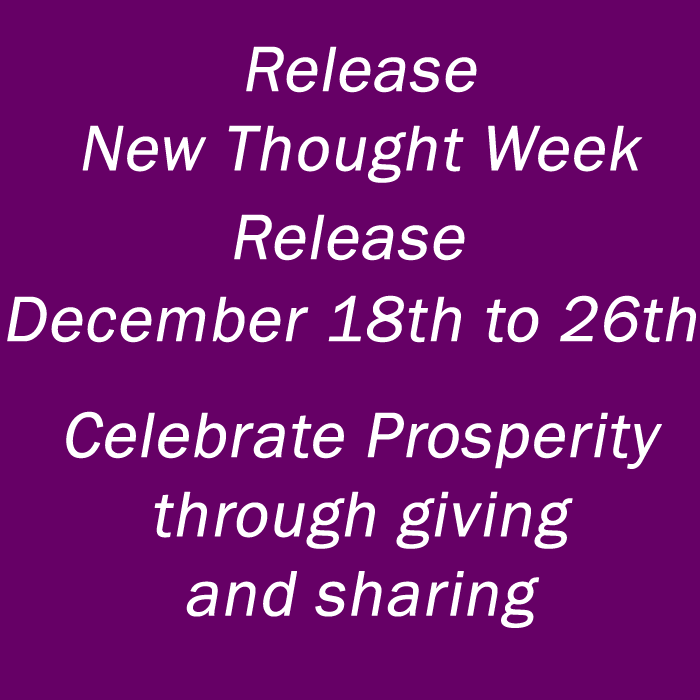 A growing collection of resources supported by a vast and expanding team of volunteers around the globe.

Listen to New Thought Radio broadcasts from the New Thought Streams PodCast Archive, along with a growing collection of New Thought Music directly from New Thought Artists around the world.

"'The truth, once announced, has the power not only to renew but to extend itself. New Thought is universal in its ideals and therefore should be universal in its appeal. Under the guidance of the spirit, it should grow in good works until it embraces many lands and eventually the whole world.' ~ James A. Edgerton, New Thought Day, August 23rd, 1915."

Be as water, as you are ...
The New Thought Tao

New Thought Solutions for New Thought Sharers and New Thought Communities. Empowerment programs that awaken us to the co-creative "Power of We." Grow and thrive sharing a rainbow of New Thought wisdom with the world.

Contribute to the Growth of the Library

To Build A Powerful Platform, begin with in.

In-tegrity begins within, the path walked without fear. How do you Walk Your Talk? Join us on New Thought Radio as we discuss New Thought Ways and Walks